Because you know there are always ore photos – Full photo albums are on Flickr – Sacramento, Lake Tahoe and San Francisco.

The surprise, last-minute trip (aren’t they the best ones!) to Northern California was a road trip, but not really a “rogue trip” since this was my transportation for the week. As much as I LOVE my Rogue, this was fun to drive.

It was a whirlwind five days of work, sight-seeing and catching up with a friend. Part of what made the trip so fascinating was realizing that from our Sacramento base we were only 2 hours from Lake Tahoe and 2 hours from San Francisco.  I highly recommend taking a moment and looking at how close things really are to you and stop using “but it is so far” as an excuse. Things are often much closer than we think.  And Day Trips Are Awesome!

Before I headed east and west, I did a quick afternoon exploring Sacramento.  Besides seeing the Capital Building and the Leland Stanford Mansion, I did a self-guided tour around Sutter’s Fort and we had dinner along the river in Old Sacramento.  I’m a bit of a history nerd, so getting the chance to learn more about California and U.S. history was a blast. 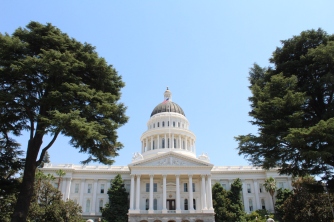 The next part of this adventure was a drive up to the Lake Tahoe area.  Steady climbs through the mountains, absolutely stunning forest scenery and a gorgeous day made for quite a drive. Not to mention going from the 107 degrees in Sacramento to the 72 up in the mountains was a nice respite.  There was a lot of tourist traffic out, so I didn’t get to stop and take as many photos as I would have liked, but I still came home from that day with 150+, including these from Donner’s Summit, North Lake Tahoe and Emerald Bay.

The last leg of the Northern California trip was a day in San Francisco – one of the places on my travel bucket list.  We only had a few hours in SF, so we chose to see as much of the city as we could in a short period of time by taking a Big Bus Tour. It was a gray, chilly day in San Francisco (no surprise there!) but we bundled up and sat on the upper deck of the double decker bus and got a tour all around the city.  We hopped off at the Golden Gate Bridge and walked part of it. We had a great seafood meal and wandered around the piers before heading up to drive down Lombard Street – in the dark! and then up to Colt Tower on Telegraph Hill to see the full moon. All in all a magical day in the city. Now I have a long list of places I want to go back to and spend more time and do more exploring, including Alcatraz.  Pro tip – Alcatraz tour tickets sell out weeks in advance so plan accordingly.  At least I got a couple of great photos from the Golden Gate Bridge.

Northern California, thanks for the hospitality, I will be back! So many places I still want to explore. 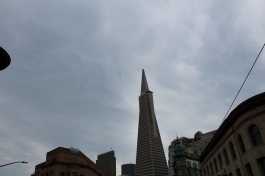 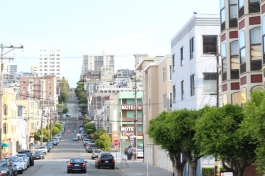